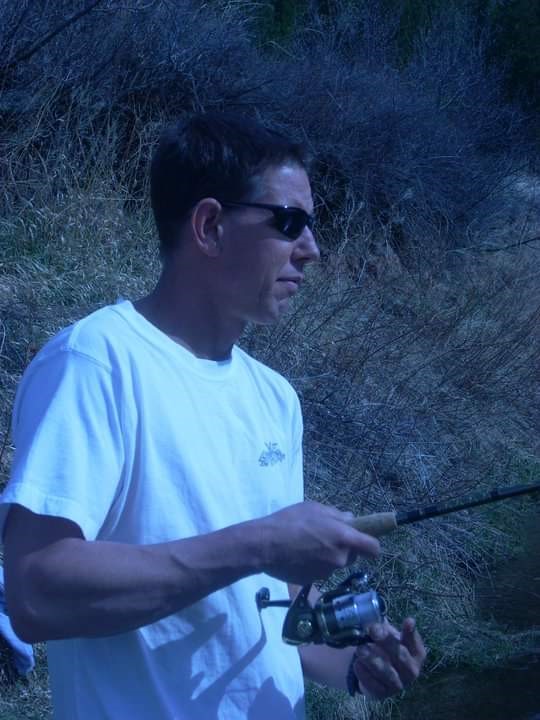 Vaughn Edwin Adams, 57, of East Helena, MT rode his last wave to heaven on June 24, 2022.
Vaughn was to born to Geraldine Callahan and James Edwin Adams on March 20, 1965 in Montebello California. He grew up in Southern California, mainly in Norwalk and Lakewood.
Vaughn grew up alongside his sister Amber Adams (Hewitt) and Bryce Adams. As children, they would re-enact scenes from their favorite TV shows, ie: Emergency, The Brady Bunch, and the Partridge family, or from favorite movies such as The Great Race (Push the button, Max!)
When Vaughn was little, he was afraid of water and did not like getting in a swimming pool. One day, Vaughn was invited to swim at a neighbor’s house, he was running and tripped over a bench and flew into the pool. He came up laughing and was no longer afraid of water. Ironically after that, surfing became a lifelong passion.
Vaughn also enjoyed going to car shows, watching car auctions, attending concerts with his family & friends, working on tugboats & bargesand working in his “shop” building and tinkering.
In 1997 Vaughn moved to Darby, MT where he was introduced to the family business of logging. He loved this new career. Even after having the tendon ripped out of his pointer finger which left his finger not bendable, He still continued on.
Eventually, in 2009 Vaughn made his way to Helena, MT where he met his life partner Connie Griffin. Vaughn acquired 4 children and 10 grandchildren. Vaughn, Connie, and the kids made frequent trips, traveling to Yellowstone, Glacier, Idaho, and California. In 2012 while working in the oil fields in North Dakota, Vaughn was diagnosed with Squamous Cell Carcinoma and courageously fought and won! Vaughn remained in remission until his death. Unfortunately, the cure caused lasting effects that eventually took his life.
Vaughn loved being “Papa or Pops”, spending all holidays with his grandchildren, attending Christmas programs, dressing up as Santa, going on family vacations, fishing, picking up the kids from school, attending the kid’s taekwondo, and blasting the biggest fireworks for the kids on the 4th of July. Vaughn was an amazing person, who was selfless and forgiving. He loved us with all his heart. He is and will always be in our hearts.
Vaughn is proceeded in death by his Grandparents Edwin and Emma Adams, Grandparents John and Dorothy Poelman, Parents, Jeri and James Adams, cousins, Mike, Billy, Claude and Gene
Vaughn is survived by life partner, Connie Griffin, children Sirena (Jason) Steward, Kodie Baker, Jerika (Nick) Enderes, ShiAnn (Chandler) Reel, his grandchildren, Braydun (Lilly), Kailey, Maddie, Camrenn, Denver, Ryan, Nikayla, Jordan, Casyn, and Brandt. His sister Amber (Mel) Hewitt, nieces Laurice (Jacob) Seely and Carson, Cheyanne Hewitt, Erin Hewitt, brother Bryce (Shannon) Adams, niece Dallas Adams, nephew Evan Adams, and many more cousins, aunts and uncles.
Vaughn,
You will always be in my heart, thoughts, and prayers. May you know peace and freedom from all that you have suffered through, and say “hi” to Mom, Dad, Granny, Grandpa, Gene & Billy for me – Amber
The family would like to express their gratitude to Dr. Tom Weiner for his exceptional care of Vaughn.
We appreciate the time and patience you took to care for Vaughn in his struggle with cancer.
A Celebration of Life will be held on July 4, 2022 at 4:00ish- End of fireworks at 3753 Beechnut St, East Helena, MT 59635