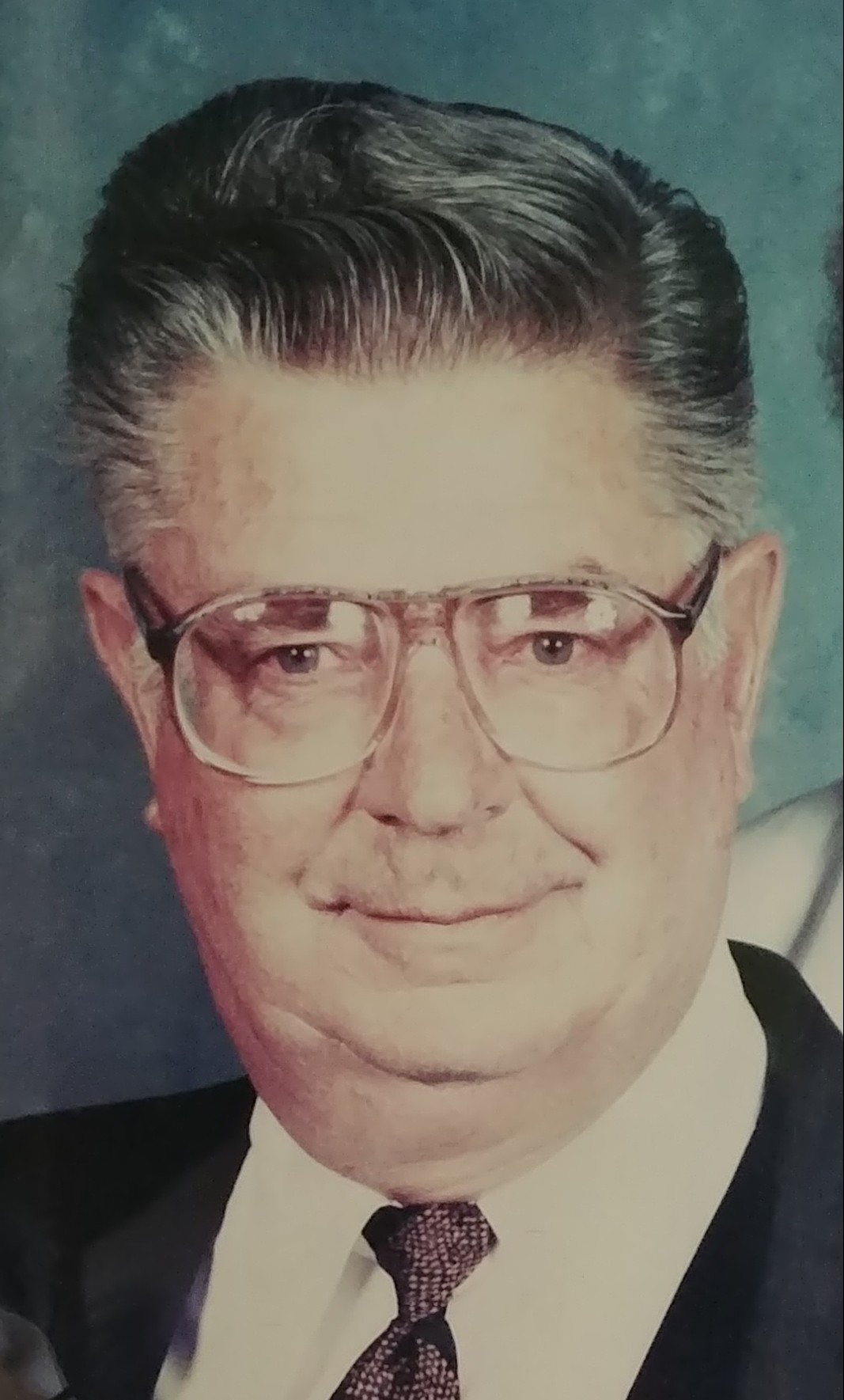 Vernon Booth Miller was born December 15th, 1921 in Wellsville, Utah to Job Miller and Elizabeth Booth.  He turned a land mark age of 100 years old in December of 2021 and left us shortly after on January 27th, 2022 to be with his beloved wife, ‘Deannie.’

After his birth, the family moved to New Chicago, Montana where he attended Drummond High School.  He enlisted in the army on June 3rd, 1942 and was active through November 30th, 1945.  Vern worked on base in Helena and while on duty one day, he went to the Helena telegraph office and that is where he met Claudena (Deannie) R. Kaiser.  He knew as soon as he saw her that she was the one he’d marry which he did on December 5th, 1942. He had two daughters, Bobbie and Frankie, and they made their home in Helena, Montana.   He received many awards during his time with 334th General Service Engineers and 168th Engineers Battalion, seeing combat during WWII along with combat in central Rhineland.  Awards are as follows:  American Theater Service Ribbon, Euro/African/ Middle Eastern Service Ribbon, Asiatic/Pacific Theater Service Ribbon, Good Conduct Medal, and two Over Seas Service Bars.

After the war ended, Vern returned to Helena and worked his way up from clerking at Helena Hardware Store to becoming the Administrator of the State Board of Equalization/State Tax Appeal Board.  His dear friend, Patti Bonness, was his secretary as well as a wonderful friend to the family.

Vern built a duplex in Helena for his family to live in.  He was very handy with all types of tools and created interesting wooden craft items including a bear shaped end table that was a show piece.  Whatever he needed, he learned to build, including a TV which was first in the neighborhood in the 50s.

At his 100th birthday party his daughter, Frankie, asked him how he avoided becoming depressed considering his eyesight was mostly gone and he couldn’t do what he used to.  His answer was that before he got up in the morning, he made a plan of something to accomplish that day.  He exercised his mind constantly and challenged himself always.  He managed to direct his life all the way to the end.

He was a remarkable man, and if a person met him or did business with him, they didn’t forget him.  He was ‘Good Buddy’ to most all around him.  Frankie discovered this when she phoned his service providers.  Almost every person she spoke with had stories to tell about his staying on top of every aspect of doing business with them.

Ellie Harmen became a personal friend and caregiver to both Vern and Deannie in later years.  Ellie shared many afternoons sitting out front watching the lake keeping both company.  Vern enjoyed a cold Miller Light and telling life time stories.

Vern had a generous business arrangement with Ellie where she was to make sure he would never have to move into a rest home.  His fear of possibly moving, drove him to stay on his toes til the very end.  Ellie was largely responsible for Vern living a good life in his later years.  She stated how very much they enjoyed sitting out front watching the geese at least once most every day.  Vern also cared for Ellie’s family and helped meet their needs as often as he could.

Most of Vern’s friends commented how much they enjoyed a good visit out at the lake.  Dan Moore and his mom, Shirley, remember the early days playing cards with Vern and Deannie almost daily.  Halloween was a time when Dan and Frankie and other siblings all went trick-or-treating and their folks would dump their candy buckets onto the card table where they all enjoyed the loot!  Dan has other memories of being taught to eat peas with a knife, dunking cookies, playing frisbee and making sure everybody had a turn to ski.

Errol Hammond was Vern’s longest friendship spanning back about 70 years.  Errol said they would sit out back over looking the lake and visit about their childhood, school days, growing up in New Chicago and years in the military.  A favorite memory of Errol’s was Vern calling him every morning for a weather report.  A handful of people including Vern’s brother, Chuck, said that they were also called for their reports.  Errol chuckles recalling his most favorite memory of Vern calling him ‘dumber than a box of rocks’ on more than one occasion including when attaching leader line when fishing.  Vern minced no words as many would say!

Vic and Norma were also good friends who visited Vern at the lake and shared the gospel with him.  There were many friends from work and different states that visited along with family – nephews Jim and Dwight Atkinson and his in-laws, Alliena and Claude Kaiser.  Claude also honorably served in WWI.

Water skiing was the main entertainment in the late 50’s – 60’s and Vern would drive the boat non-stop from dawn til dusk.  Bill Hermes and his family were a long standing important influence re anything involving boating and skiing.  Vern discovered his green thumb when skiing ended and he built a large greenhouse and filled it with 20 plus tomato plants.  He taught himself how to can tomatoes and fresh lake salmon to share with all.  He was always busy and trying to improve upon all his projects in which he succeeded.

In later years John Palmer became a faithful and helpful friend to Vern.  Vern originally met John through needing help with his boat dock and a friendship developed.  John and Holly always volunteered their services, being available whenever Vern needed their assistance with any project on his property.   John would also show up periodically to check in on Vern and see if anything needed his attention.  If anything needed worked on, he would fix it immediately including equipment upkeep and yard work.  John enjoyed sitting outside overlooking the lake shooting the breeze.

Vern was quite dependent on his granddaughter, Lori McCormick.  Over the past years, Lori researched extensively loss of eyesight, hearing and general issues that elderly folks face.  She bought audio books, special lights, glasses, etc. to help improve the quality of life for both Vern and Deannie.  Lori dropped her work to answer his calls and was always there to help on the phone or in person.  Vern’s granddaughter, Millie McCormick, kept him supplied with special large printed cards, letters, and photos of his great great granddaughters while she was living out of state.   Both Millie and Lori remember fun family times at the lake when Deannie and Buddy would play different instruments and sing along. In later years, they shared their talent by playing for residents at numerous rest homes.

Vern’s daughter, Bobbie Barrett, visited when she could and took an interest in his military years during WWII and was gathering stories to publish before she became unable to continue.  Frankie would come over for a few weeks in the spring to do a thorough spring cleaning and create flower gardens with her dad.  He lovingly said they were for ‘Der Mama,’ meaning Deannie.  Vern’s greenhouse was his pride and joy.  He was successful in all his endeavors.

In earlier years, Vern joked about being surrounded by women.  One day he asked his folks for one of their male singing canaries.  All was well until the day Frankie called him at work horrified that ‘Jr.’ laid an egg!  That was a laughable disappointment.

Vern was a memorable character for sure and will not be forgotten.

He was predeceased by his brother, Heber and sister, Ilene.

He is survived by:  brother – Chuck Miller and his family (Chuck passed a short time after Vern due to covid), daughters – Bobbie Barrett and Frankie Lawlor, granddaughters – Lori McCormick  (John Beckman) and Millie McCormick, along with great and great great grandchildren, nieces, nephews, cousins and extended families

Military Service with Honor Guard will be on Friday, June 3rd at 3:00 pm at Fort Harrison Veteran’s Cemetary.  Following the service, all are invited to the lake house (6145 York Rd.) for reminiscing and if you wish to paint a rock for Buddy’s Memorial Garden.